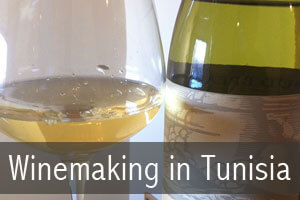 Tunisia is Africa’s northernmost country, making it a rare location close to the equator for quality wine production. Along the northern coast and the Gulf of Tunis the climate is significantly influenced by the Mediterranean with mild, wet winters and hot, dry summers creating a successful viticulture environment. For those who are interested, you should ask to include a visit to the vineyards on your Tunisia tour.

The wine industry did not flourish in modern-day Tunisia until the late 1980s, early 1990s. With foreign investment in its wine industry from several European countries, production has slowly increased in the 2000s. Specialized co-operatives have been formed and engineers trained for the purpose of increasing the vines planted, until eventually spanning thousands of hectares. Today grapes cover more than 10,000 hectares of land. Wine production ranks third in Tunisian agriculture, behind olive oil and wheat. It also generates significant revenue for Tunisian coffers, with exports of a million liters of wine annually to Europe, Russia, and the United States.

Because of the heavy French involvement in Tunisian viticulture, the main grape varieties planted in Tunisian vineyards are similar to those notably in the southern regions of France. The key red-wine grapes are Carignan, Cinsaut, Grenache, Syrah, Mourvedre, and more recently the Bordeaux reds Cabernet Sauvignon and Merlot. A small percentage of Tunisian wines are white, using the grape varieties of Chardonnay, Muscat of Alexandria, Ugni Blanc and Pedro Ximenez.

Tunisia has a long and rich history of wine production. The North African sunshine and Mediterranean climate have created a great environment for the nation’s little-known winemaking trade to grow and increase in prestige.