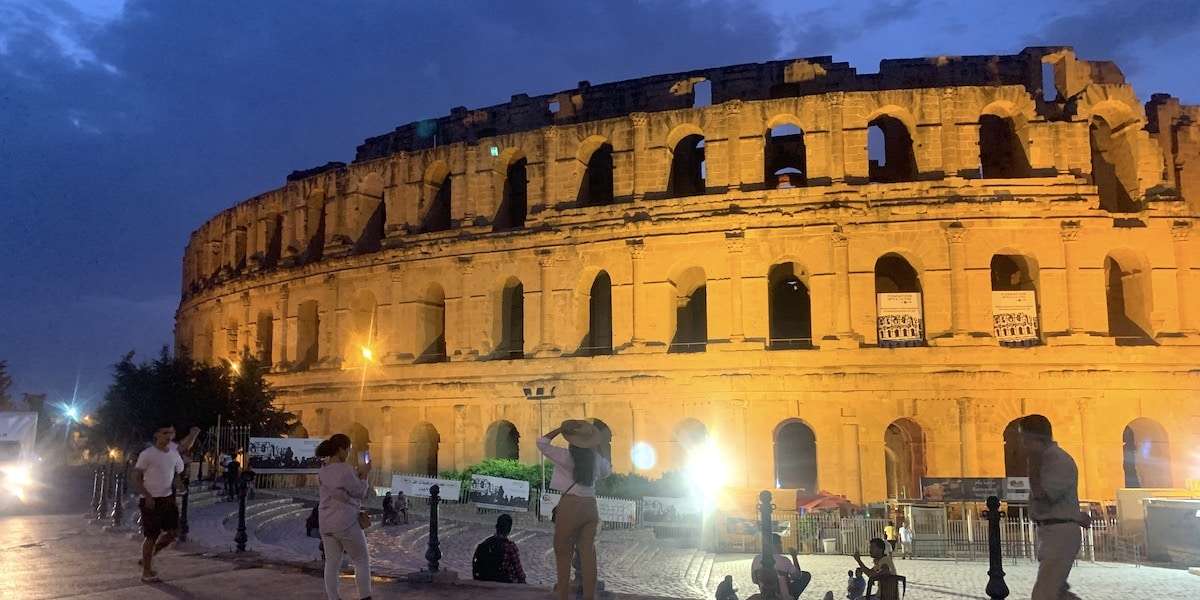 Tunisia Travel, What You Will See

I love Tunisia! I love music! Put them together and you get the annual symphony music festival hosted in El Jem. I mean, what could be better than a group of experienced musicians playing masterpieces under the stars in the middle of an ancient amphitheater?

The highlight of any trip to Tunisia is the ancient outdoor Roman amphitheater in El Jem. For some team bonding, Mosaic North Africa (including its division of Tunisia Tours) set out to the city of El Jem on the east side of Tunisia. Not only did we see this amazing monument to Roman architecture but we also took the opportunity to be serenaded in the cool Summer’s night air.

On Saturday August 3rd, several of us and our families made the trek to El Jem. As a new team-member of Mosaic and new to Tunisia itself, this was my first time traveling within the country. What an amazing sight as my family and I exited the highway getting glimpses of the ancient amphitheater peering through the more modern buildings of hotels, residences, and businesses. After more than 5-hours of driving, we were ecstatic to finally get a peek at this massive structure built without modern equipment.

Built in the 3rd century AD by the Romans, the amphitheater in El Jem is the largest of its kind in North Africa. It uncanningly resembles the coliseum in Rome to the non-discerning eye (mine included). Home to gruesome executions by man and animal and gross gladitorial matches, the amphitheather remains a venue for entertainment today though with much less brutality. My family and I visited this colosal building during the day to climb its steep steps all the way to the top. With few restrictions, almost the entirety of the amphitheater is open from the very top levels of the amphitheater to the “dungeons” where vicious animals were kept and even down to the tunnels that almost completely intersect the oval shaped theater.

The annual concert series held in this amphitheater is in its 34th season, each Summer wowing crowds with gorgeous music in a magnificent venue. On August 3rd, Austria’s Wiener Opernball Orchester (Vienna Opera Orchestra) performed a fantastic program, not forgetting the dramatics of opera.

I already told you I love music. I must now warn you that while I am new to Tunisia and Mosaic North Africa, this concert has a special place in my heart as I actually have a degree in music and spent a decade teaching symphonic music in the California public school system. For those who appreciate critique of classical music, I will try my best to give enough detail to allow you to hear the music as you read. If you are not a purveyor of classical music, I will not be offended if you stop reading now and simply look at the photos.

Under the direction of Uwe Theimer, this average-sized ensemble was clearly in their element. Seeking to preserve the traditions of the Vienese School, the orchestra performed masterpieces by Austrian and Hungarian composers such as as Johann & Josef Strauss, Franz Lehar, Emmerich Kalman, & Robert Stolz. Of course opera was a focus for the evening with more than half of the performance devoted to operettas performed by soprano, Brigitta Simon and baritone, Till von Orlowsky.

From a technicaly perspective, it is difficult for me to applaud this ensemble. It is clear that the individual musicians are masters of their craft yet as an ensemble, I wonder how different their music sounds from the conductor’s podium as opposed to where I sat some 40 meters away. Or particular concern were entrances and releases that were noticably out of sync. I want to give the benefit of the doubt that playing in an outdoor venue with modern applification certainly has its effects. With this orchestra making this part of their annual tour, I ask why this has not been addressed?

Despite this excusable issue, the group did not fail to offer an entertaining performance. The star of the show was baritone soloist, von Orlowsky. Musically talented with an amazingly rich voice, he went the extra mile to bring in theatrics (it was an opera showcase afterall.) Truly enjoying himself, von Orlowsky made it a point to draw in the audience by emoting, dancing, and even running around the stage (literally running a circle around the stage!)

After three encore performances, including a playing of Strauss’ The Blue Danube Waltz, our evening ended after three hours or great fun and atmosphere. The music was awesome but the venue was the most magnificent. 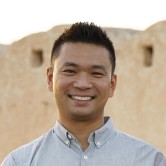 Ivan works in the marketing department for Mosaic North Africa. He now lives in Tunisia with his wife and three children. Previous to this gig, he taught band & orchestra in a California public school.