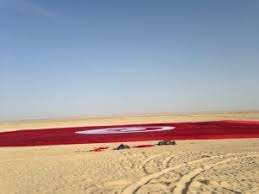 As Tunisia seeks to get it’s feet back on the ground after their revolution and the formation of a new government, they have taken it one step further to promote unity by creating the largest flag. On May 2, 2015, Tunisia unveiled/presented the largest flag in order to hold a Guinness world record. The name of the event was “Ahna Tounes”, which translates to “We are Tunisia.”

Our Tunisia sales reps had the opportunity to see this flag in person just one day after the event. Wow! What a spectacular site! It was HUGE! Laying flat in the desert sand, just past the Ong Jemel site (famous for Star Wars filming) not far from Tozeur, the flag covered 104,544 square meters (around the size of 19 football pitches). 80 kilometers of fabric was used, weighing in at 12.6 tons. The plan is to now recycle the fabric and make it into blankets for children.